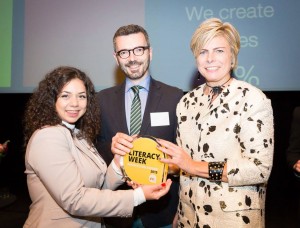 A series of events across Europe marked the first European week of literacy from 8 to 17 September 2015. On September 17, the Commissioner for Education, Culture, Youth and Sports made the opening speech of the concluding conference organized by the European Network for Literacy (ELINET) in Brussels with the question: “How to face the future, knowing that one of five Europeans is illiterate?” The need for targeted measures to improve the basic skills of the European citizens was stressed also in the speech of Mrs. Marianne Thyssen, Commissioner for employment, Social Affairs, Skills and Labor Mobility, and among the audience were representatives of most European governments directly involved in developing and implementing policies for education and adult education. Bulgaria was represented by Mrs. Valentina Deykova, national coordinator for adult learning.

The organizers had adopted an interesting approach to the awards ceremony – it took place after determining the winner of a very competitive electronic voting in the hall. Based on the criteria “innovation”, “reaching audiences” and “resources used” three initiatives from the 140 recorded for the literacy week were pre-selected for the finals. The three projects – from Finland, Bulgaria and Spain – were presented with short movies and subsequent voting gave the initiative to “Grammar on the way” of 63 School from Sofia. The young teacher Lily Stoilova accepted the trophy from HRH Princess Laurentien of the Netherlands.